Sketch made of Patrick Madigan c1890 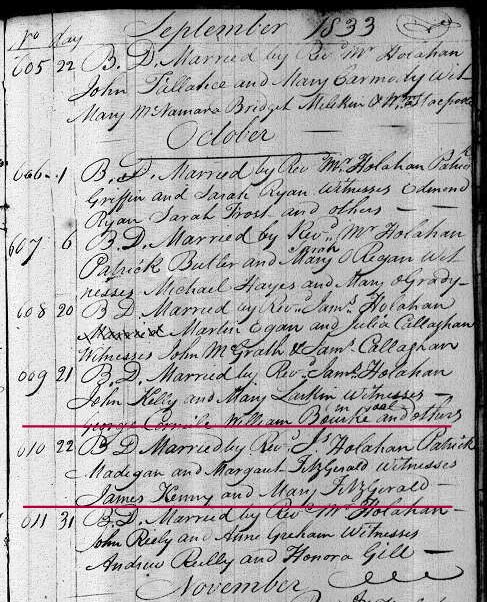 The Mafia Encyclopedia has an entry on the Ragen Colts, the Chicago Irish Gang. In the entry, Harry Madigan is mentioned, albeit, not so kindly. 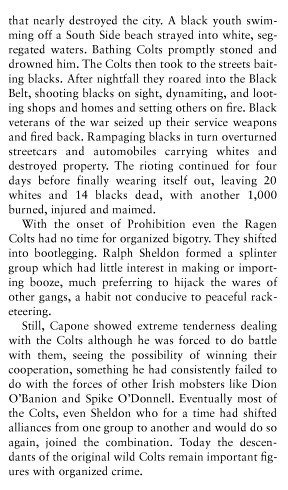 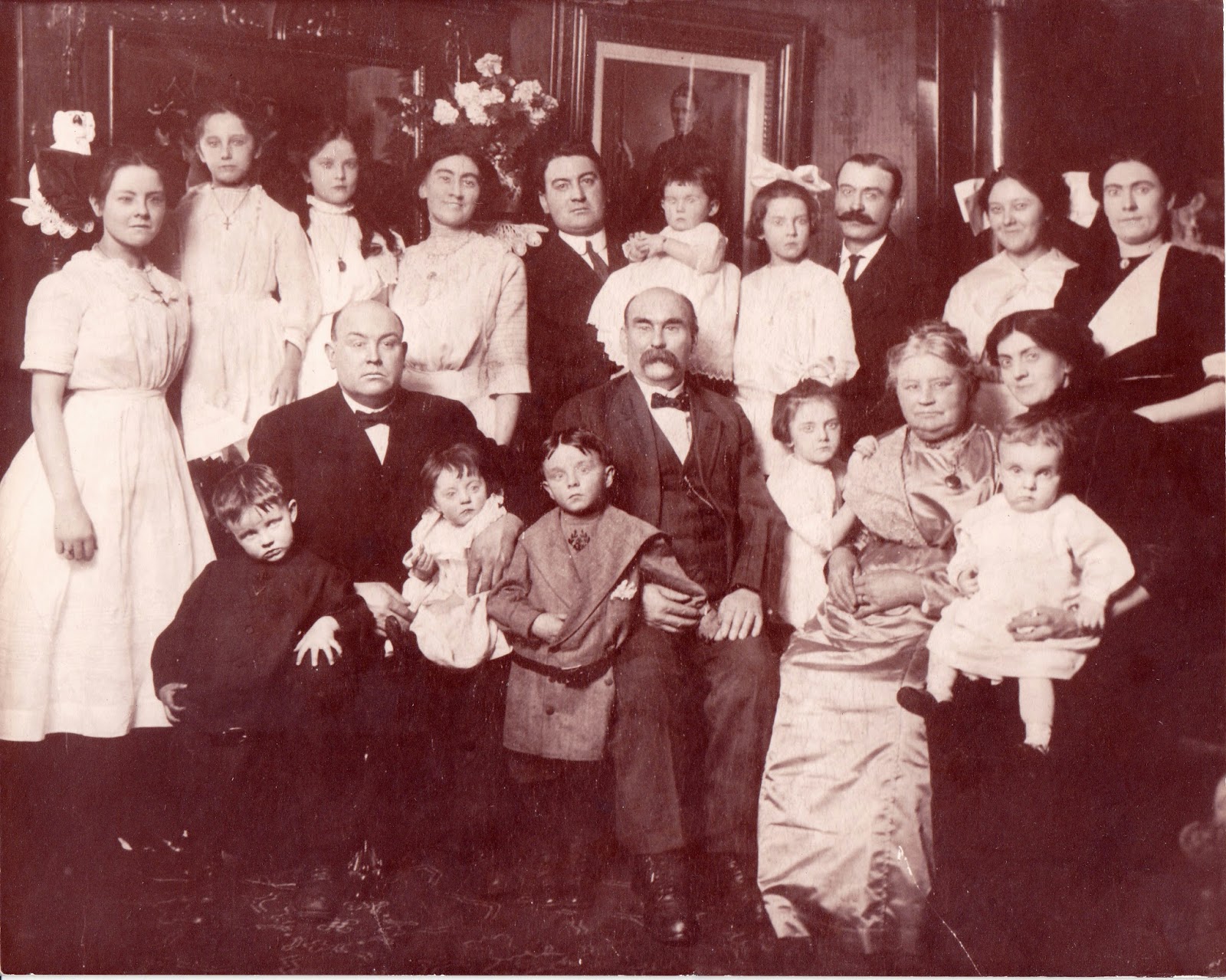 This wonderful photo, taken in 1912, celebrates the 50th wedding anniversary of Michael T. Madigan and Bridget Cherry, both born in Ireland.

Michael T. Madigan was born in the townland of Coonagh in the Civil Parish of Killeely in County Limerick. He was baptized on 08 August 1841 in the Catholic Parish of Parteen and Meelick.

Michael and Bridget were married 01 February 1862 in St. Munchin's Church, Limerick City. The couple immigrated to the United States in the mid-1860s along with 3 of their children. Once in the US Bridget gave birth to 10 more children. In Chicago, Michael was a laborer and sewer builder.

Michael T. Madigan is the brother of Patrick Madigan (1850-1890). Their parents were Patrick Madigan (c1809-1884) and Margaret Fitzgerald (c1806-1886). The parents, Patrick and Bridget, died in Chicago, Illinois. and are buried in Calvary Cemetery, Evanston, Illinois. The two sons, Michael and Patrick, along with their respective wives, Bridget and Margaret, are also buried in Calvary Cemetery, Evanston.

Although for purposes of this photo only blood descendants are included. It is hoped the in-laws were also invited to the party!!

Uncle Tom Sullivan (1908-1996), the nephew of John Madigan, said Mary was a cook at Harry Madigan's restaurant and bar. John also worked there.

A memorial for John Joseph Madigan was created on Find-A-Grave in 2014 by Nancy Weise. The person creating the Madigan memorial on Find-A-Grave regularly photographs grave sites in the area. Although all the information is not completely correct, especially about Mary being John's "daughter" rather than his wife, it provided John's place and date of death and the fact he worked for Harry Madigan "who had a Budweiser Tavern in Chicago." Also, the link to John's father "Patrick Madigan (1852-1937)" is incorrect. John's father, Patrick (1850-1890), died in Chicago and is buried in Calvary Cemetery, Evanston, Illinois.

Thank you Ms Weise for posting the gravestones and trying to capture the family. 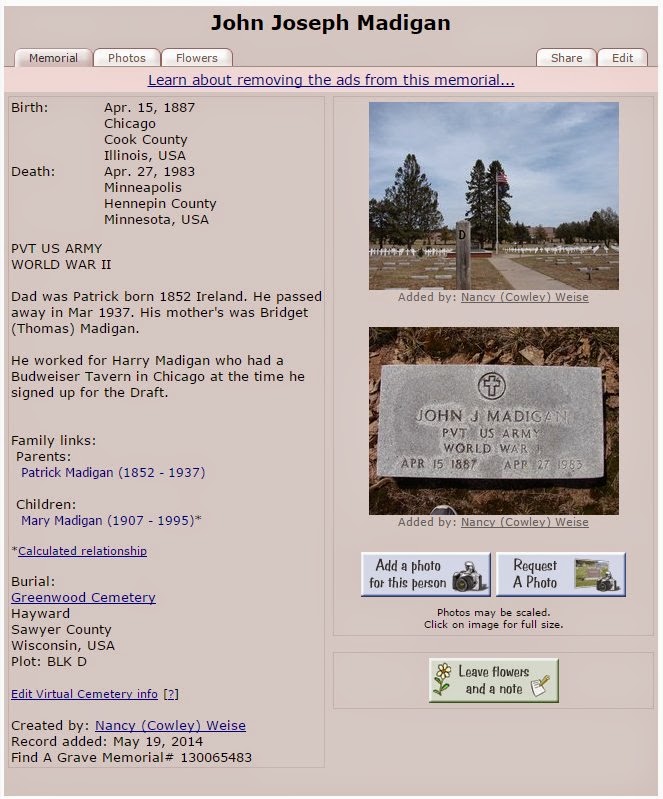 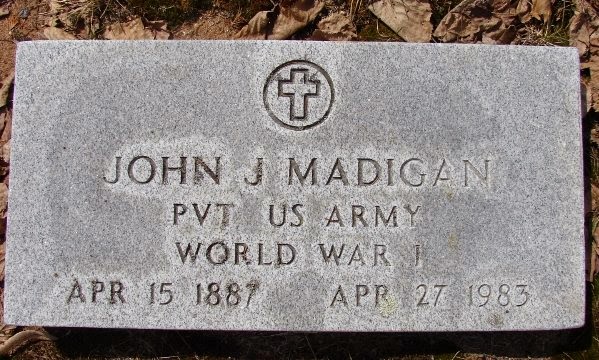 A memorial for Mary was also created on Find-A-Grave by Ms Weise. 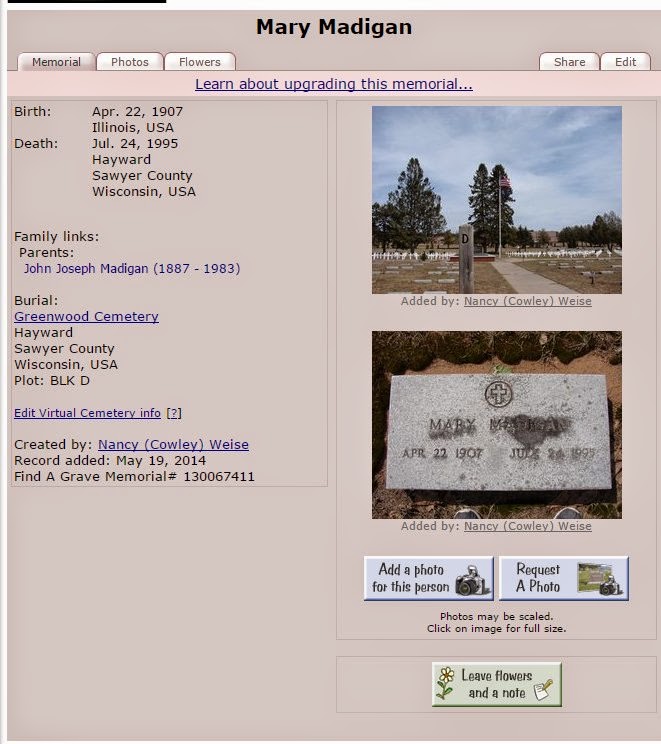 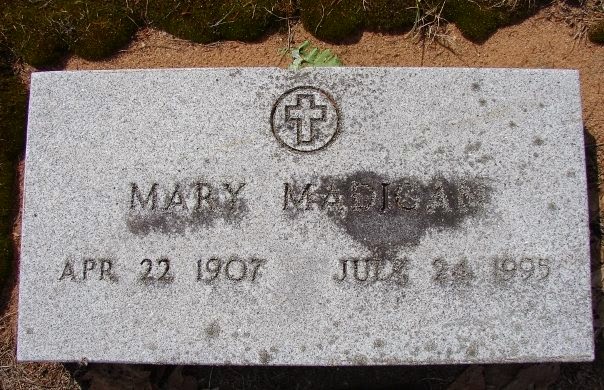 I have been unable to locate a death notice for neither John nor Mary Madigan.

When I went to Calvary Cemetery's Sexton's office they told me there was no marker for these graves. When I walked the area, I couldn't find a marker either. So off we went to Gast Memorials. We were told that Calvary Cemetery will not allow a single, long gravestone to cover the two graves but we can order a smaller marker at the head of each of the graves.

Since Thomas and his mother were buried in the same grave, I thought I'd do that marker first and then next year install the companion marker for Patrick Madigan (Sr.). Gast helped design the two stones so this could happen.

In late August, the new stone was installed. 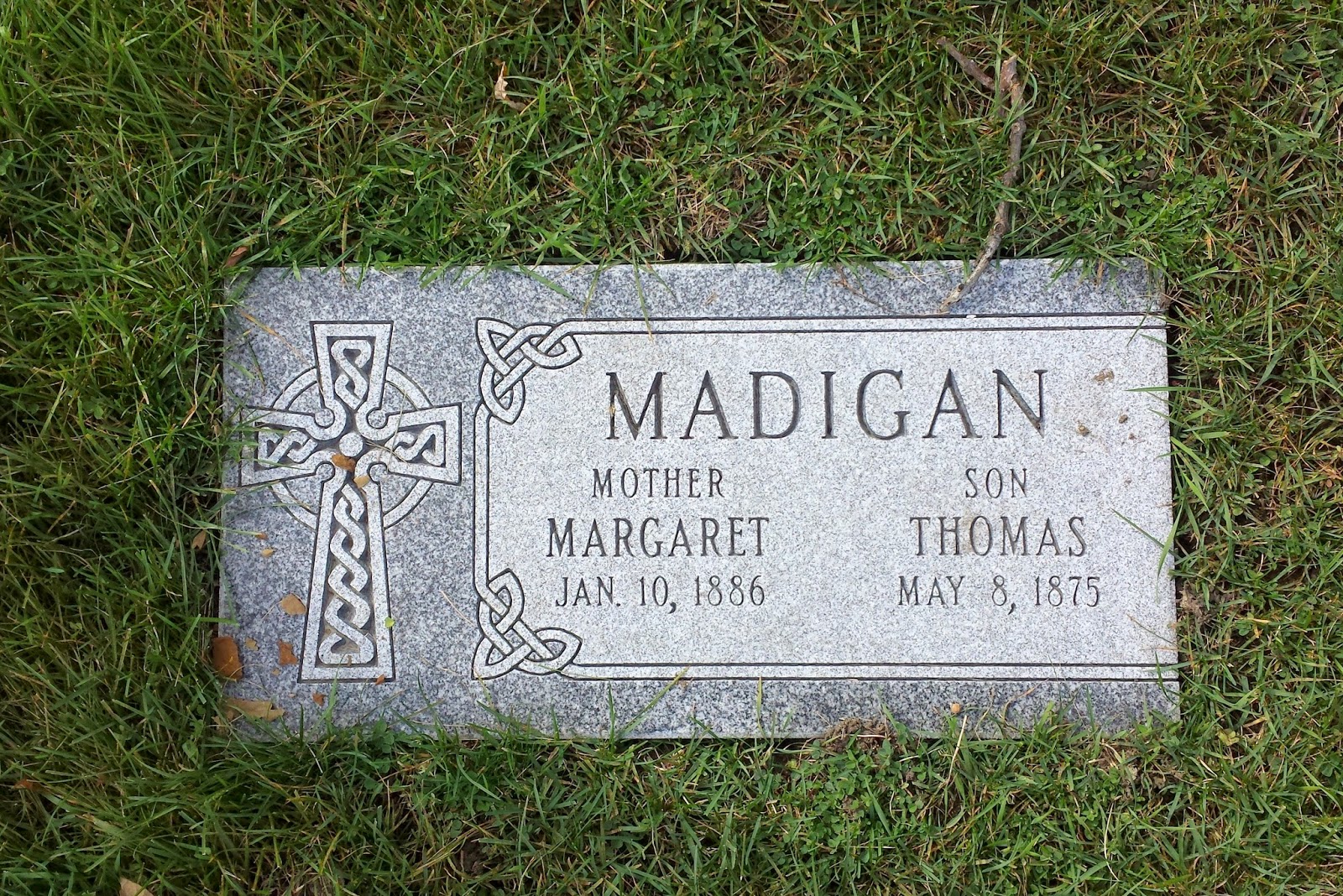 You can see from the design above, it is intended to have a stone to the right which would have Patrick (Sr.) carved on it with his death date and a Celtic cross on the right side of the stone.

I went to the cemetery, so excited to see the stone. I cleared off the new dirt and as I was photographing it, I noticed another stone in area, but not very close to the above stone. It read simply "Madigan." 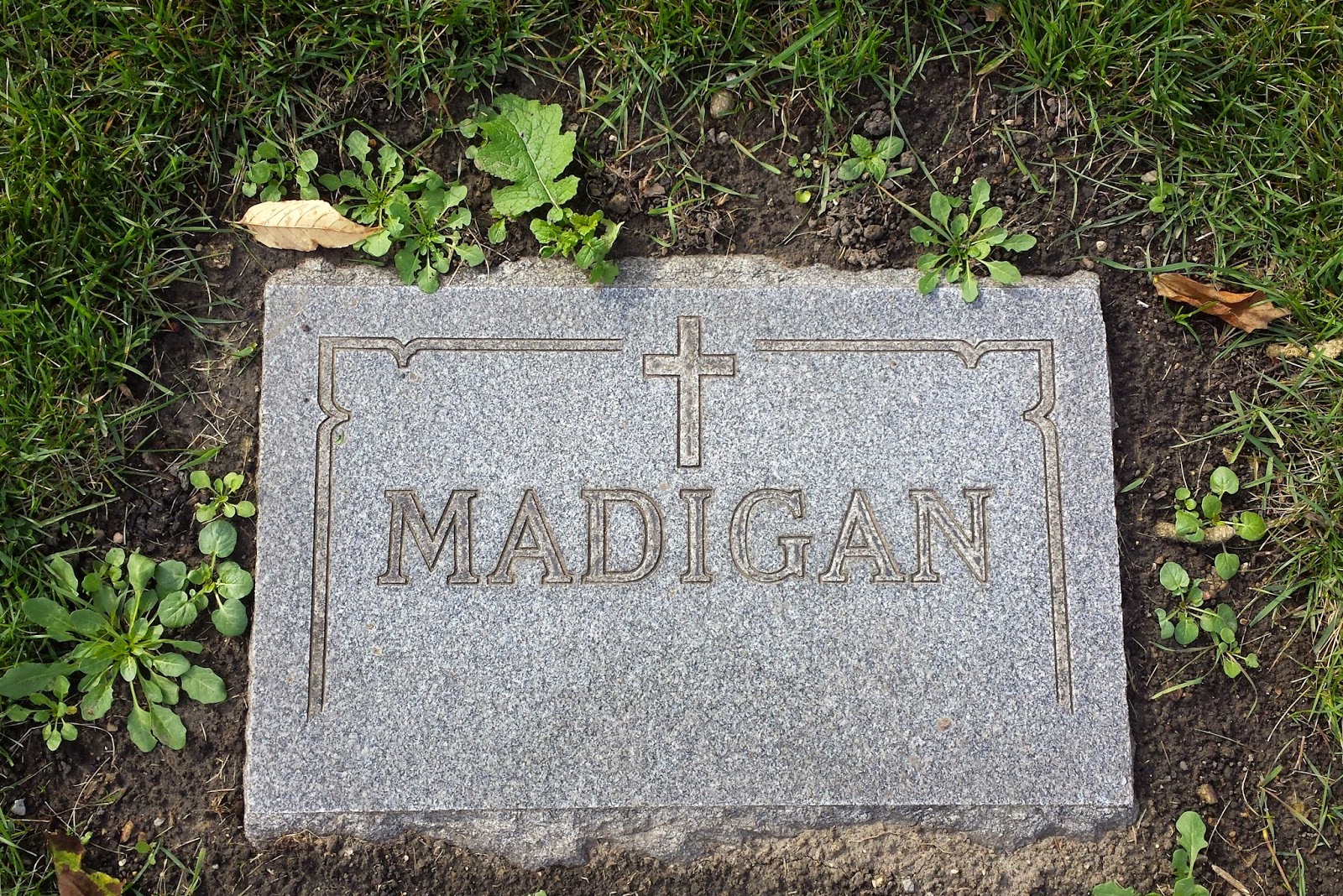 I went back to the cemetery office to find out who this was. Of course, I thought it was yet another Madigan relative I didn't know about.

I learned it was the stone for the Madigan grave that I just purchased the new stone for!!!

I asked why the stones, if intended for the same gravesite were placed so far apart, actually in a different row. They didn't have an answer. They sent a person out to make sure the new stone was correct.  And, I am told it was.

So, I decided to have the original Madigan head stone moved to sit to the right of the new stone. The original Madigan stone now sits over the grave of Patrick Madigan (1809-1884).  I'm sure future genealogists checking out the cemetery will be confused by why the stones read the way they do. Perhaps they will find this blog site and get their answer. 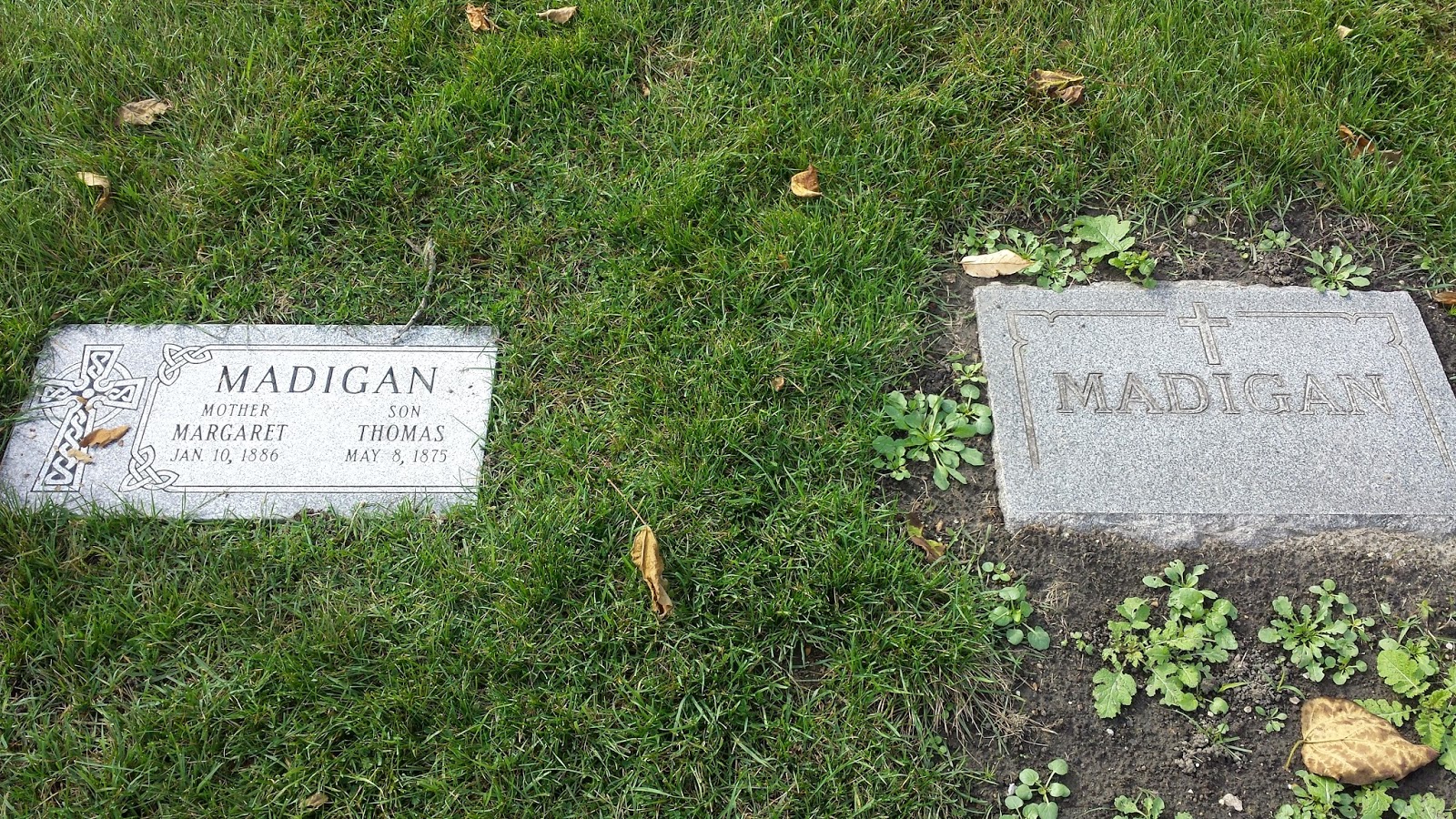 
The story behind the night Billy McSwiggin was killed in front of The Pony Inn:

"Back in Chicago at the beginning of 1926, Capone was in excellent spirits. Not only had he made his mark in New York, but his whiskey deal would change the face of interstate transportation. Young men with a thirst for adventure and the need for money made a good living working as one of Capone's truckers.

"In the spring of 1926, Capone's run of good luck hit a snag. On April 27, Billy McSwiggin, the young "hanging prosecutor" who had tried to pin the 1924 death of Joe Howard on Capone, met with an accident. He left the home of his father, a veteran Chicago police detective, and went with "Red" Duffy to play cards at one of Capone's gambling joints. A bootlegger named Jim Doherty picked them up in his car.

"Doherty's car broke down and they hitched a ride with bootlegger "Klondike" O'Donnell, a bitter enemy of Capone. The four Irish lads went on a drinking binge in Cicero with O'Donnell and his brother Myles and ended up at a bar [this would be The Pony Inn operated by Harry Madigan] close to the Hawthorne Inn where Capone was having dinner. O'Donnell's cruising around in Cicero was a territorial insult.

"Capone and his henchmen, not realizing that McSwiggin was in the bar with Myles O'Donnell, waited outside in a convoy of cars until the drunken men staggered out. Then out came the machine guns and McSwiggin and Doherty were dead.

"Capone was blamed. Despite the blot on McSwiggin's integrity for keeping company with bootleggers, sympathy was with the dead young prosecutor. There was a big outcry against gangster violence and public sentiment went against Capone.

"While everyone in Chicago just knew that Al Capone was responsible, there was not a shred of proof and the failure of this high-profile investigation to return an indictment was an embarrassment to local officials. Police took out their frustrations on Capone's whorehouses and speakeasies which endured a series of raids and fires."

Posted by Elaine McIntyre Beaudoin at 3:40 PM No comments:

When I started genealogy more than 20 years ago I knew nothing more than my great grandparents' names - Patrick and Bridget Madigan.  I remember the day I learned the parents of my Mother's Mother were buried a little over a mile from where I live.  It was a Saturday and I was all alone in the house without a car.  So, I called a taxi and took it to Calvary Cemetery in Evanston. (This is how genealogists respond when they NEED to follow up on information.) It was probably the late 1990s.

I arrived at the Sexton's office and asked for the grave location of Patrick and Bridget Madigan.  I was surprised to learn that my great grandmother, Bridget Thompson Madigan, was buried with three of her sons, Thomas, James and Harry, but not her husband, Patrick. A separate location was given for him.  I thought it strange but assumed when I took off on foot to find the graves they would be close to each other. They were not!

After finding Bridget Thompson Madigan's grave, I nearly walked across the entire cemetery to an area that had very few markers.  With much traipsing back and forth over bumpy ground I still was unable to locate his grave so I went back to the Sexton's office.  He provided me with the name of an individual who was also buried in the same large plot and who had a military grave marker. Back I went and found the plot of land with the military stone but no other markers.  However, the Sexton had now provided me with was a copy of all the individuals who were buried with my great grandfather. Nine additional names. I thought "Wow" these must all be cousins or some other relations I don't know about.

Over time I researched these individuals, many of whom were infants or very young children.  I found little information beyond date of death and no link to my Patrick Madigan.

I always felt sad my great grandfather had no marker on his grave. This past summer when my husband asked what I wanted for my birthday I said, "a gravestone for Patrick Madigan."  He had heard me speak of my great grandfather and the absence of a marker so it wasn't that much of a surprise.  He also does family genealogy and he truly understood why I even asked for such a gift.

On my birthday we went to Gast Monuments and picked out and designed the stone.  It was installed last week.  When I went to visit the grave this weekend it gave me such a warm feeling to know, after 123 years, Patrick Madigan's gravesite was now identified, but even more importantly, he was not forgotten.

And, what about all those others who were buried with him?  Well, while working with the cemetery and the monument company to install the marker, I was told Patrick's grave was a charity grave and  all the individuals buried with Patrick Madigan, like him, were individuals whose families could not afford to purchase a grave for their loved ones.  At the time of Patrick's death of pneumonia he was 39 with six children and one on the way. I'm sure his family had no money either.

At least now I know why Patrick is buried in a different location than his wife and children. I wish we had the money, I would have bought a huge monument and had all ten names inscribed.  But, I am happy my great grandfather has his stone.  Perhaps family members of the other interred individuals will someday put a stone on their relative's grave.  I know it would make them feel "real good" inside.

Is This Blog Still Active?

As new information is located and lends itself to posting on the blog, it will be shared here. So, even though there may not be recent posts, the blog is still active. If you have a question, email me at elaine.beaudoin@gmail.com

TO ENLARGE AN IMAGE, DOUBLE CLICK ON IT AND IT WILL OPEN LARGER IN A SEPARATE WINDOW.
YOU MAY NEED TO CLICK ON IT AGAIN TO FULLY INCREASE ITS SIZE.

Elaine McIntyre Beaudoin
Elaine has been working on her family history for more than 25 years and is particularly interested in Irish and Chicago genealogy. She is retired from DePaul University and holds a master's degree in Library Science and an MBA. Elaine became interested in using blogs as a way to communicate with her family, grammar school friends and university colleagues in 2010, establishing, over time, 15 different blogs. She has served as the Road Trip Chair and Archivist for the Computer Assisted Genealogy Group - Northern Illinois (CAGGNI) and is the immediate past Chair of the DePaul Emeritus Society. Elaine is a member of the National Genealogical Society (NGS), New England Historic Genealogical Society (NEHGS), Chicago Genealogy Society (CGS), Computer-Assisted Genealogy Group - Northern Illinois (CAGGNI), and the Irish Genealogical Society International (IGSH).